Good-bye To An Old Friend – “My” Old Maple

Those of you that have spent time here on a regular basis know that I love to take pictures of the wildlife feasting and visiting in the grand old maple just feet off the back of my house.  With my kitchen a story up at the back of the house, I got to spend time up in the tree with all the critters.  It was wonderful and relaxing.

The feeders in the old tree weren’t the only draw for the birds. The large spreading tree offered a great place to hang out as well. 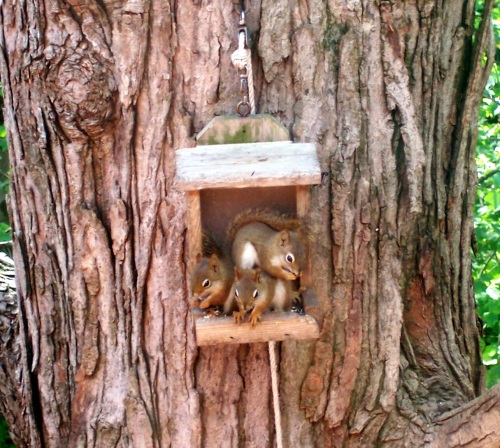 Baby squirrels would hone their climbing and jumping skills on its broad limbs after pigging out at the ‘all you can eat’ buffet. 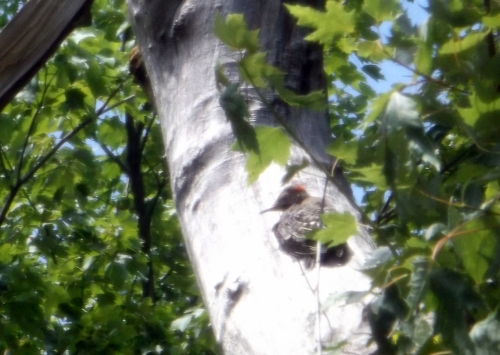 But the old tree had been dying off, bit by bit, over the past few years. Of course, the woodpeckers all loved the bug buffet. And the resident flickers decided to raise a brood of young in a top branch of the old tree last year.

Unfortunately, this spring it was clear the old tree wouldn’t stand on its own much longer.  Only about a quarter of the tree began greening up.  After several days of heavy rain and wind, I was out in the yard with the energizer bunny (Ryder) and noticed a distinct list in the tree.  I checked the ground and realized there was no mound next to the base of the tree.  Roots on a leaning tree will push up the dirt as the tree pulls them up.  There was nothing there. YIKES!  I informed my husband that the next storm would probably push the tree over, and, oh, by the way, there are some branches that need taken off the roof.

So my husband goes up to remove branches and I began vacuuming.  As I was in the middle bedroom, I heard noise, looked up, and saw all kinds of dust and pine needles go blowing by the window. I rolled my eyes figuring he was dragging the branches off the side of the house and kept vacuuming.  A few moments later he walks into the house looking white as a sheet.  Part of his commentary cannot be printed here.  Apparently, one of the branches on the roof was still partially connected to the old tree.  He was tugging and twisting the branch in an attempt to break it off.  Whilst he was holding that branch, the tree fell nearly taking him over the side of the roof with it.  Have I ever mentioned how much my husband dislikes heights? 🙂

This was my view as I walked into the kitchen.

The old maple fell into an old pine on the corner of the house. This gives you an idea of how close it was to the window.

Into the old pine. The large green part of the old tree is literally in the pine tree. As you can see, this dead side has lost almost all its branches. 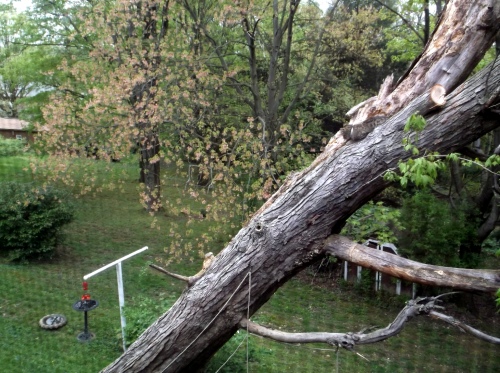 One of the neighbor’s cats decided this was a great vantage point to view the world. (The mesh pattern is the window screen in the bathroom.)  You can see we moved the bird baths away from the tree.

As we pondered whether or not to assist the old tree to the ground, two days later Mother Nature took the matter out of our hands with some nasty storms that included high winds and tornado warnings.  It was a day that made me feel a little like Dorothy in ‘The Wizard of Oz’ as all kinds of crap went blowing by the windows.  A glance out the window showed the old pine swaying mightily and making the old tree move as well.  I stayed well away from the back of the house until I  heard all the snapping and popping and ‘KABOOM!’ that signalled the end of the old tree. 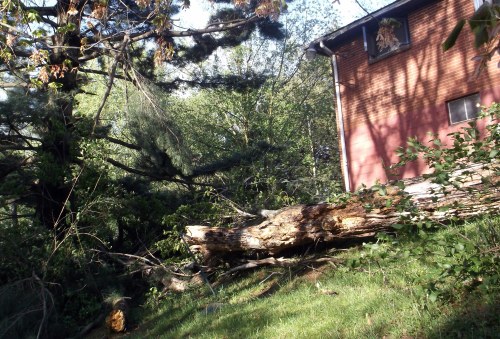 The old lady was down. 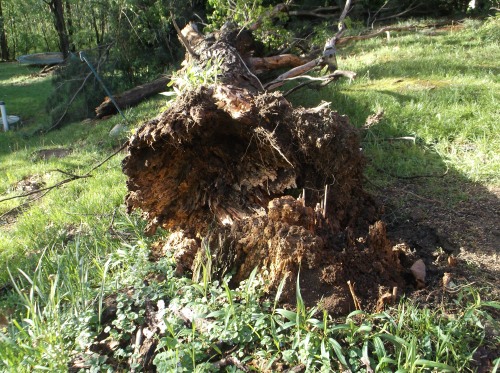 As you can see there was considerable rot throughout the tree. Only one large root was feeding the live part of the tree.

In this shot you can see the destruction wrought on the old pine. A quarter of it stripped bare. And all the mess at the base of the pine is the smashed top of the old maple plus the pine branches ripped off by the old lady on her way down.

It was very interesting to watch as over the next couple of days everyone, feathered and furred, came to inspect the downed tree.  I began checking out the windows whenever I could to see who was next to inspect the old lady.  I was amazed at the activity AND the noise as they all spread the word, “Come here! Check this out!” Nothing goes unnoticed by the wild denizens of yard and forest.

While the critters have gone on with their lives, making adjustments to the new location of their free food, I have been bereft.  The view from the kitchen table is wide open and empty.  No more birds at breakfast.  No woodpeckers and loud squirrels for lunch.  And no more flying squirrels to peek at in the night.  All the activity and nature right outside my window – gone. I’ll live, I know. But for now I mourn my daily trysts with my old lady and the wildlife she nurtured.