So I was working on putting things back together when life went sideways again.  One I can talk about the other I can’t.  The one I can talk about is the cat situation.  My son left for college (I have to figure out how to blur faces in the photos before I post on that).  But the cat that normally sleeps with the kids now has no one to sleep with.  So Annie now wants to sleep with me.  However, Raven is the cat that has always slept with me.  And for whatever reason, maybe Raven accidentally jumped on Annie or Annie accidentally jumped on Raven, they will no longer share the bed.  As in, they are now fighting viciously.  And the worst fights are at night.  Some of them on top of me in bed.  It’s been getting ugly and I am sooooo sleep deprived.

The usual yelling at them to knock it off and separating them hasn’t been working at all.  In fact, it seemed to make things worse.  While Raven is twice the size of Annie, he is a major weenie.  He began hissing and yowling every time he saw her and then he would run and, of course, instinct being what it is, she would go after him.  AAARRGGHH!!!

This has led to some bathroom accidents and Annie not getting enough food because Raven was hiding in the bathroom where the dry food is.  I went surfing on the net and found others who have had a radical change in old cat behavior.  Unfortunately, the way that has worked the best, treating the cats like they have never met before; won’t work here because Raven can’t stand closed doors.  So separating them with a door between them isn’t possible.

So, I’ve been turfing Raven out of the bathroom (he then hid in the kitchen), taking them both into the livingroom and sitting between them playing referee, gently bopping any bad actors on the nose, petting and praising, handing treats out in a group setting for no reason other than to get them in the same place behaving themselves  (I have as third cat, Espe, who is not happy with all the violence), and being obvious in petting and playing with everyone.

Things are better, but not good.  Annie seems to have won bed rights for now.  Raven is moving around more comfortably without constantly throwing a fit and slinking from room to room.  We still have a long ways to go, but the nights are settling down.  Good heavens I need sleep.  I keep waking up and listening for trouble.  *Sheesh*  It’s really screwing with my days.  I don’t function well without sleep.  So wish me luck on the cat and sleep front.

Life At Our House

Now add bills, paperwork, critter care, yard care, and home caring to the above.  Did I mention how well I don’t function in a sleep deprived state?  So I need to sit down and come up with a schedule.  Again.  With sleep as the headliner.  Onward, ho!

I have been trying to enjoy the last of this year’s tomatoes and basil.  Bruschetta! 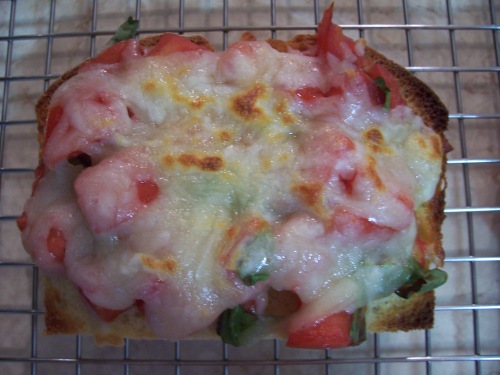 And I decided that we needed junk food, so I tried a new recipe for Apple Coffee Cake.  It was only ‘okay’.  It needed less brown sugar on top and more apples in the middle.  But it only lasted two days between the two of us! 🙂 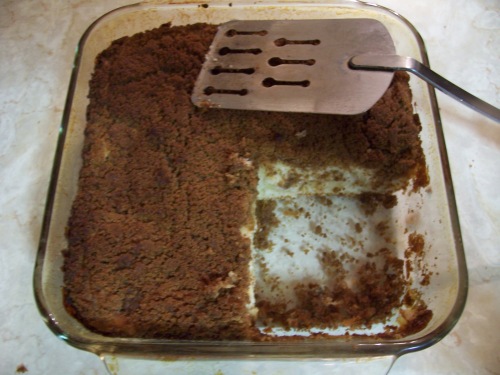 Fur Babies and Other Friends

A lazy day at our house. 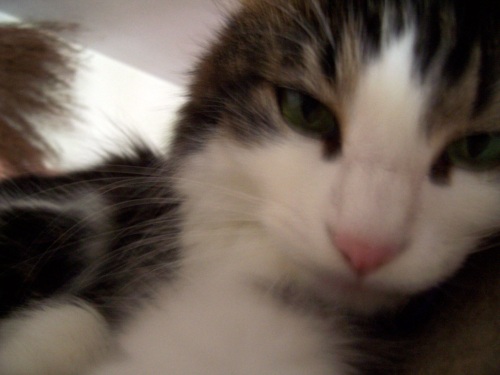 Espe. Who kept batting the camera every time I got close. 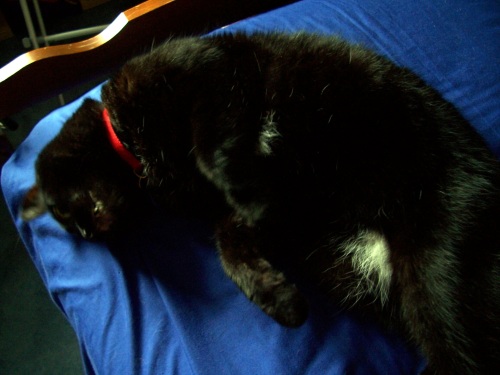 Raven trying out my son’s bed. Where he has never ever slept. 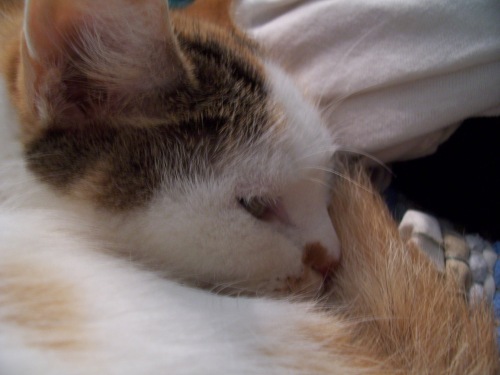 Annie. Who was unimpressed with getting her picture taken. 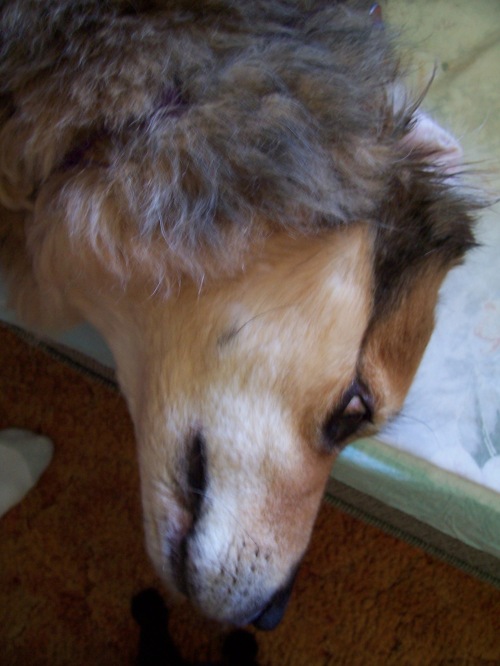 Jake. Still alive, amazingly, and hanging around on the couch.  Notice my toes and the toes of my ‘shadow’ who was supervising. 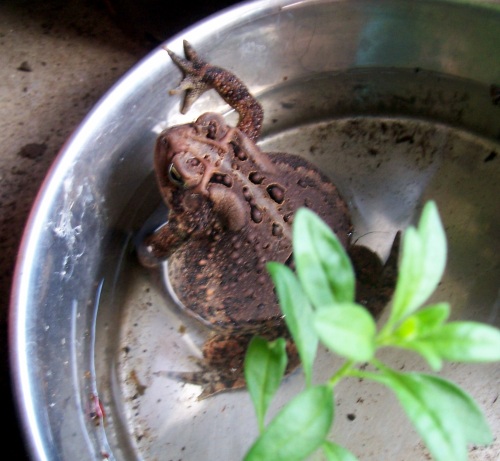 And even though it rained all day yesterday, Mr. Toad spent nearly 2 hours just soaking in the water dish. Go figure.

Out In The Yard

My son made a bird house many years ago when he was little.  We hung it on the porch and every year since, we have had House Wrens raise a brood, sometimes two.

We had our usual nesting pair this year, but they only raised one brood, so we thought we were done.  However, about 3 weeks ago, we got a surprise one morning.  A pair of Carolina Wrens had raised a brood in our porch bird house, quietly, without us noticing.  Now if you know anything about wrens, you know that quiet isn’t a word you would normally apply to them.  But they managed it!  I tried to get pictures of the 4 babies as they fledged and explored the porch.  But they wouldn’t sit still long enough AND I was trying to shoot through the screen door.  So this was the best I could do. 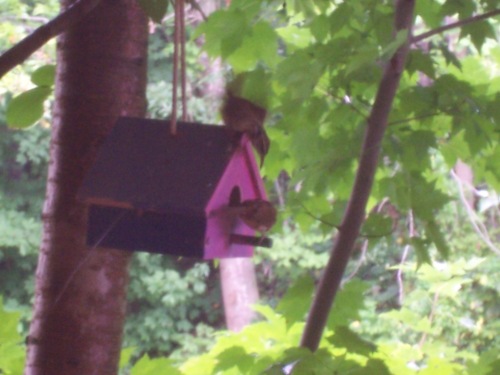 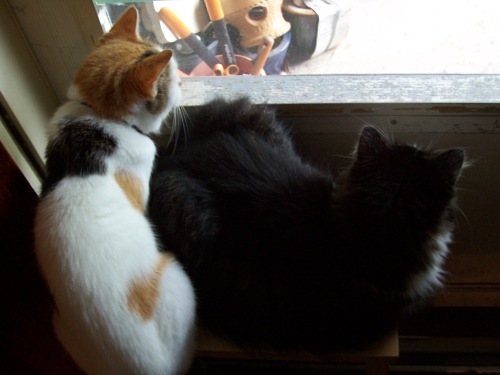 They had an audience.

Mug of the Day

An oldie but goodie. 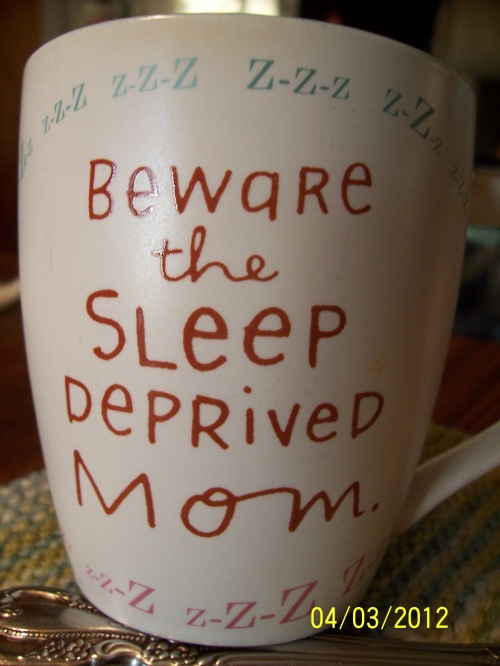